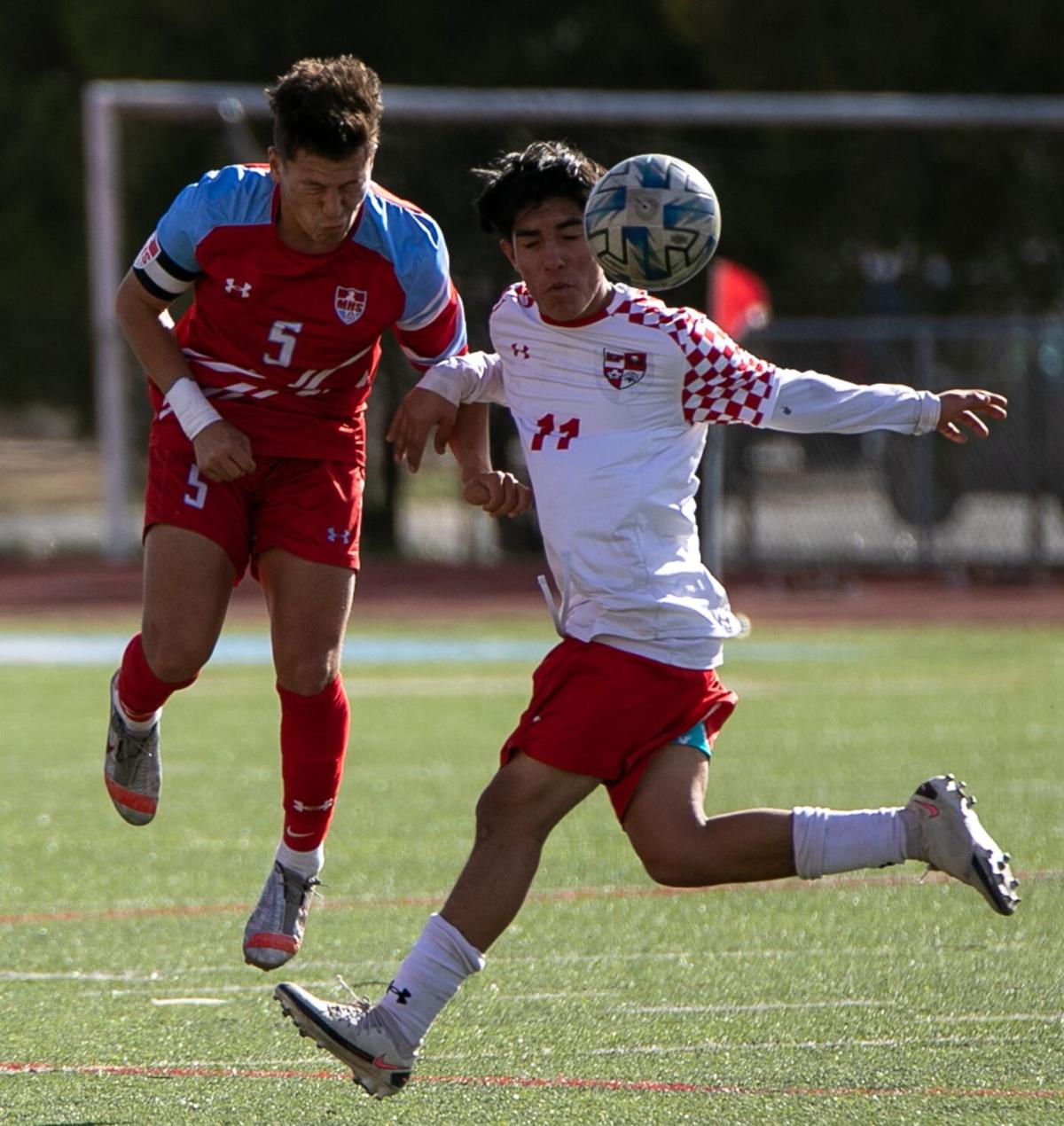 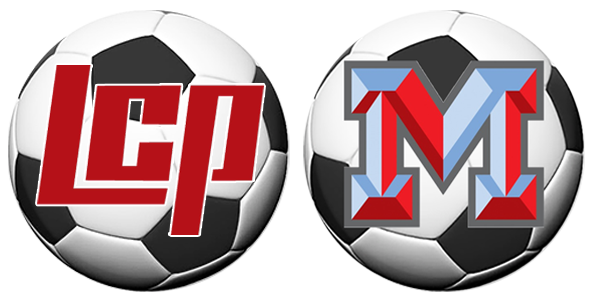 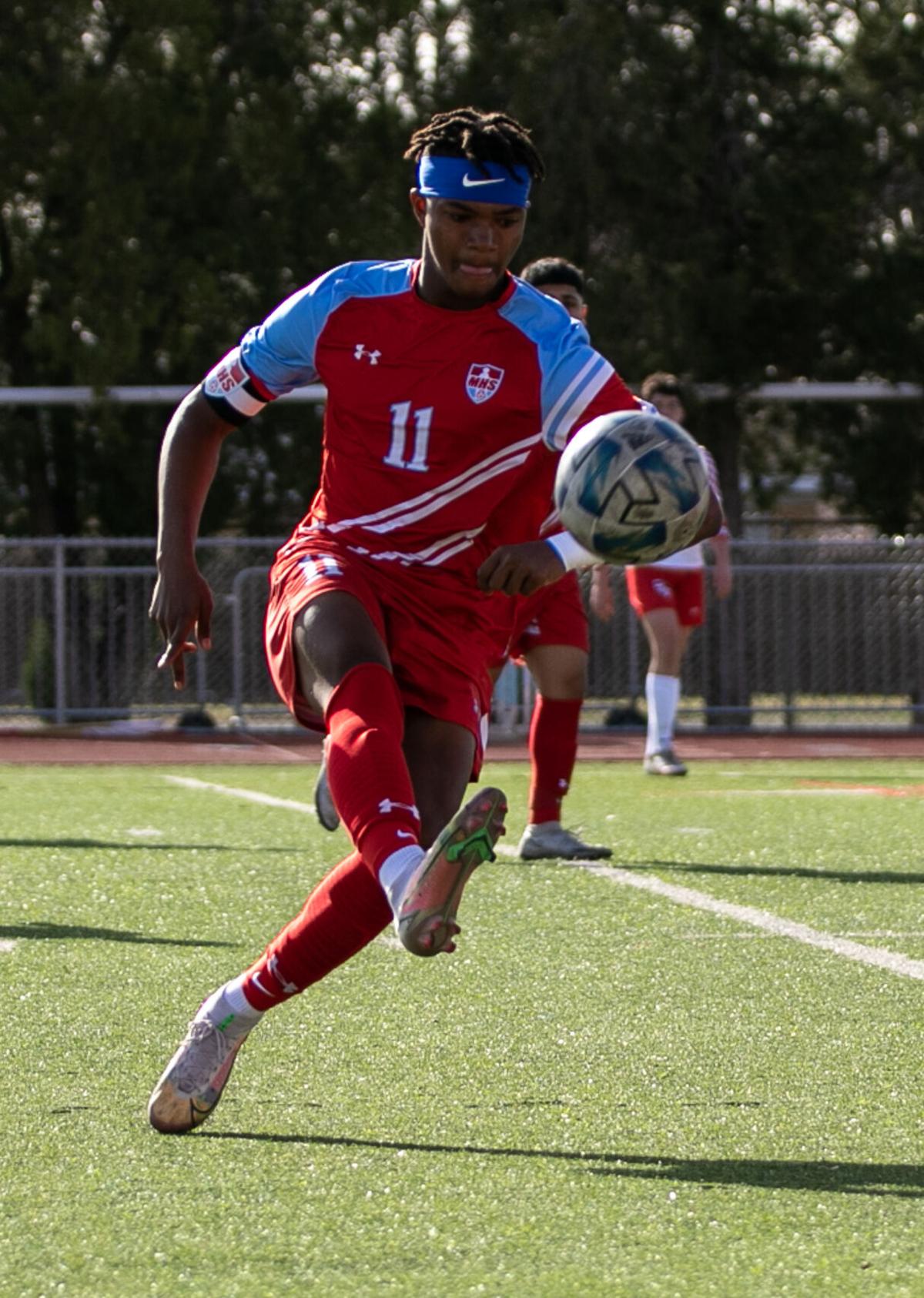 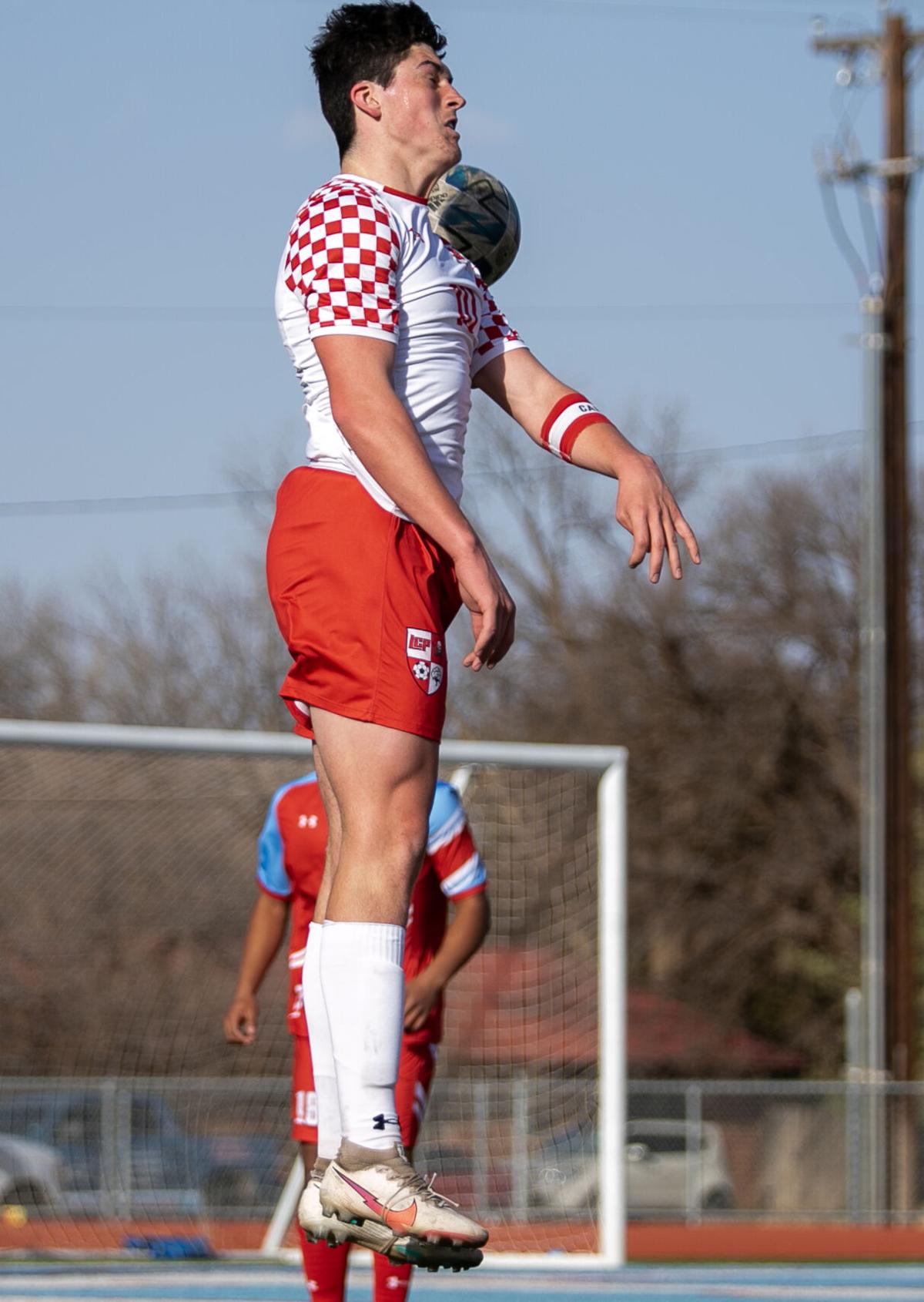 Lubbock-Cooper's Skye Cobb jumps up to head the ball. 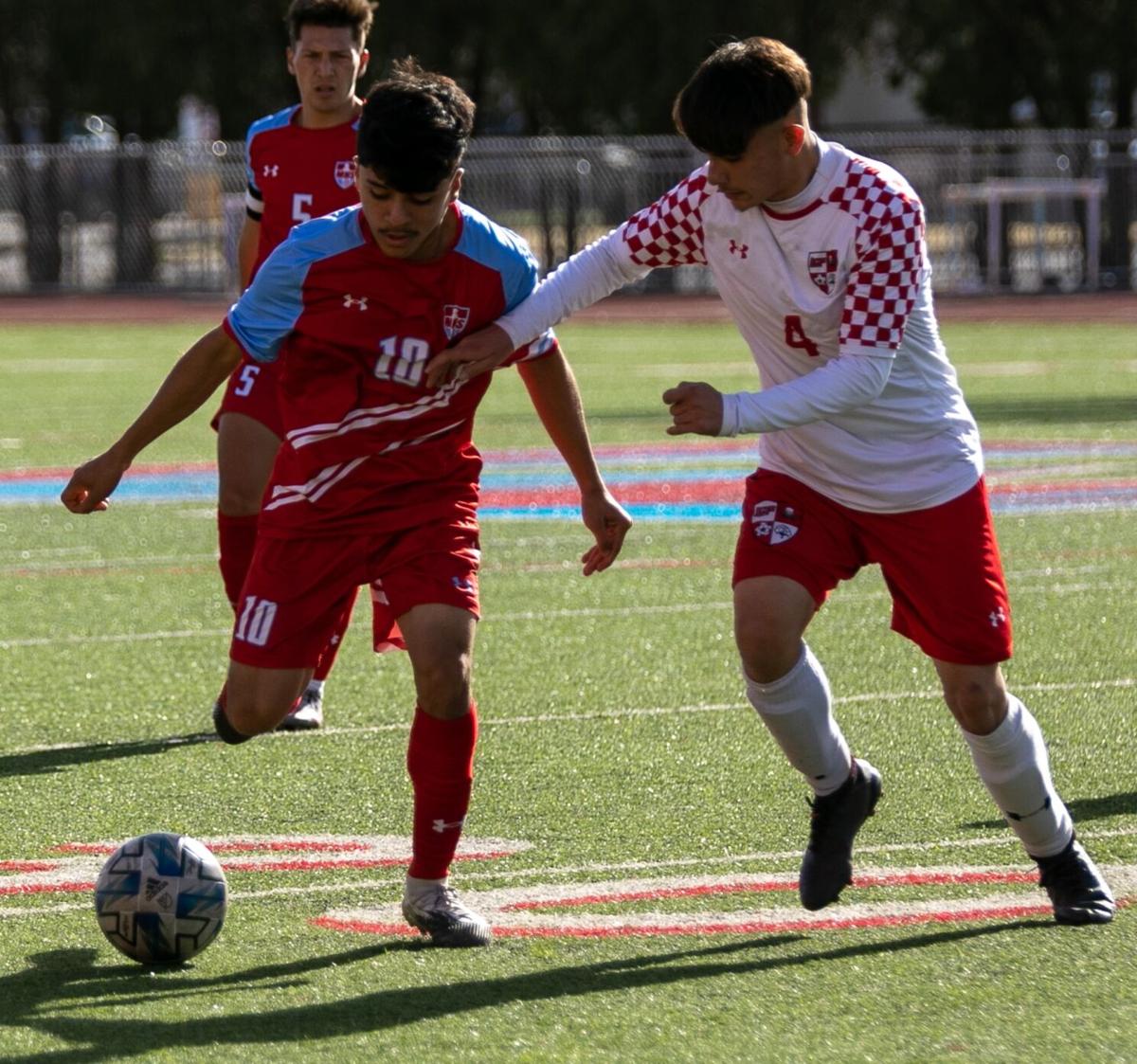 The top two teams in District 4-5A battled in an 80-minute slugfest Tuesday night.

Neither able to get the better of each other, with Monterey and Lubbock-Cooper finishing in a 1-1 draw.

“Even though we obviously wanted a victory, we’ll take it.” Monterey coach Simon Hernandez said.

The opening half belonged to the Plainsmen, who dominated the pitch from the kickoff.

A relentless attack spurred by solid passing in the midfield fueled their confidence, all led by the prowess of senior Jayden Johns.

The winging speedster created numerous opportunities for Monterey, but the Plainsmen struggled to take advantage early on.

A few cracks on goal consistently missed just wide or just over the post. The natural element of an active Lubbock wind did not help either side, with the ball often taking winding turns or sailing out of bounds.

For the Plainsmen, patience was the name of the game, something they have focused and worked on throughout the season.

“We’ve focused on being patient all year,” Hernandez said. “The patience is also part of the fact that they all believe in each other.”

That was blatantly apparent. During every dead ball or pause in play, Monterey players were constantly in communication with each other to try and fix their mistakes and Johns was at the forefront of it all.

“He’s developed into a leader, a guy that other players look toward and feed off of,” Hernandez said of Johns.

With the ball hovering in Monterey’s half the majority of the first frame, they finally took advantage on a mental lapse by Lubbock-Cooper, and once again, Johns was the beneficiary.

The Plainsmen scored their only goal of the night at the 25th minute, as the outstretched arms of Pirates’ goalkeeper Luis Crispin hardly missed the ball.

Crispin came back with a vengeance.

Even though Monterey was having their way on offense, he did not concede another goal.

Just 2 minutes after their opening goal, the Plainsmen threatened again, this time Johns as the passer to an open Cristian Carrasco, who was one-on-one with Crispin for 30 yards.

But when the blistering heater left Carrasco’s foot, Crispin was all over it.

Laid completely out in the air with full extension, LCP’s goalie made the save of the night and stopped what would have been a two-goal lead for Monterey. Five saves punctuated Crispin’s first half, but more importantly, it gave life to the scoreless Pirates.

Out of halftime, they regained confidence stemming from prior experiences.

“First time we played, they were up at half.” Pirates’ coach Trevor Burkhead said. “We’ve done it before and came out in the second with a better team. We had a game plan – be more direct. We were pretty unlucky to not get one or two more goals there in the second half.”

The Pirates went into the game knowing anything but a win would cost them a chance at a district crown, Burkhead said. And the second half showcased it, with a more confident Lubbock-Cooper team taking the pitch.

Skye Cobb looked to take control for the Pirates and being the tallest player on the field helped.

“He’s played every position you can except goalie, and to me, he’s MVP of this district … Skye can do it all.” Burkhead said.

Burkhead was also complimentary of Johns, saying he is a talented and extremely difficult matchup for any team.

Both Cobb and Johns have are likely to be prominent in postseason all-district honors, and the game came down to a battle between the two.

In the first half, it was Johns; in the second, it was Cobb’s turn to strike.

A cleared ball by the Plainsmen gave LCP an opportunity at a corner kick.

Taken by Cole Abernathy, the cross found Cobb in the middle of the box. He headed it into the net even the score 1-1, but more importantly resurrect Lubbock-Cooper’s hopes.

“It was a perfect ball and Skye judged it well, and if it’s a good ball in, he’s going to out-jump almost anybody on the field.” Burkhead said.

After knotting the score, neither team was able to deal the final blow. Although the game ended in a tie, both teams left with different tastes in their mouth.

“It’s always going to be a good game with us and Monterey,” Burkhead said. “We hadn’t lost to Monterey the last eight times we’ve met them … We kind of wanted to spoil their night.

“I told our younger guys remember this feeling when you look over and see the other team holding the gold ball. Let it give you some motivation going into next season.”

For Monterey, the outcome was worthy of a short celebration before looking toward the postseason.

“Each game is important; no game is special,” Hernandez said. “We did what we needed to do, we don’t want to get too up or too down. We celebrate now, but we have to turn our focus to Wylie.”

The Plainsmen wrap up the regular season on Friday with a road trip to Abilene to take on the Bulldogs at 5 p.m. For LCP, a regular season-ending matchup against Abilene Cooper is on tap at 2 p.m. Friday.